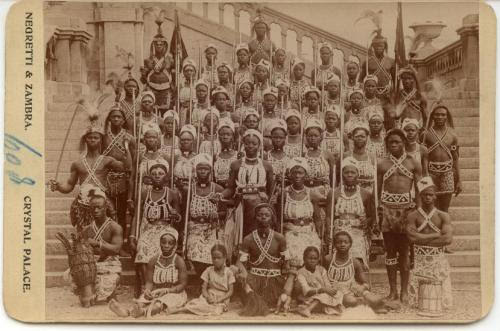 Many loved the Women Warrior’s of Black Panther but for me they hold a special place in my heart as they were inspired by the Women Warriors of the Erverh (Hebrew) Kingdom of Dahomey. Read below for some research I found about these fierce sisters and research from my forthcoming book about the Kingdom they were apart of and how this kingdom connects to our Biblical Destiny! “Dahomey is renowned as a “Black Sparta,” a fiercely militaristic society bent on conquest, whose soldiers strike fear into their enemies all along what is still known as the Slave Coast. Dahomey–renamed Benin in 1975.

“When, or indeed why, Dahomey recruited its first female soldiers is not certain. Stanley Alpern, author of the only full-length English-language study of them, suggests it may have been in the 17th century, not long after the kingdom was founded by Dako, a leader of the Fon tribe, around 1625. One theory traces their origins to teams of female hunters known as gbeto, and certainly Dahomey was noted for its women hunters; a French naval surgeon named Repin reported in the 1850s that a group of 20 gbeto had attacked a herd of 40 elephants, killing three at the cost of several hunters gored and trampled. A Dahomean tradition relates that when King Gezo (1818-58) praised their courage, the gbeto cockily replied that “a nice manhunt would suit them even better,” so he drafted them drafted into his army. But Alpern cautions that there is no proof that such an incident occurred, and he prefers an alternate theory that suggests the women warriors came into existence as a palace guard in the 1720s. Women had the advantage of being permitted in the palace precincts after dark (Dahomean men were not), and a bodyguard may have been formed, Alpern says, from among the king’s “third class” wives–those considered insufficiently beautiful to share his bed and who had not borne children. Contrary to 19th century gossip that portrayed the female soldiers as sexually voracious, Dahomey’s female soldiers were formally married to the king—and since he never actually had relations with any of them, marriage rendered them celibate.” The people of Dahomey now known as Benin are a part of the Erverh people. In Rev. Dr. Sednak Kojo Duffu Yankson in his work Africa’s Exodus To The Promised Land we read of Dahomey:

“The Biblical thread runs through the indigenous people of Dahomey in Africa as well: Dr. J. Kreppel reported in 1926 that there existed a large Hebrew community of Black Jews in the interior of Dahomey, West Africa. These Hebrews had their own central temple where animals were sacrificed. In the temple, many laws were engraved on tablets that were attached to the temple walls. The community consists of a High Priest and a large number of priestly families, whose members walk from house to house rendering educational and religious instructions to each family. Moreover, these Jews have their own Chumash (the five books of Moses) written on old parchment in Hebrew letters. They have no other book. What little Judaism they possess was transmitted to them from their ancestors. Dr. Kreppel says that they observe the Sabbath and other Jewish customs, despite the pressure from their pagan environment” (page 46-47).