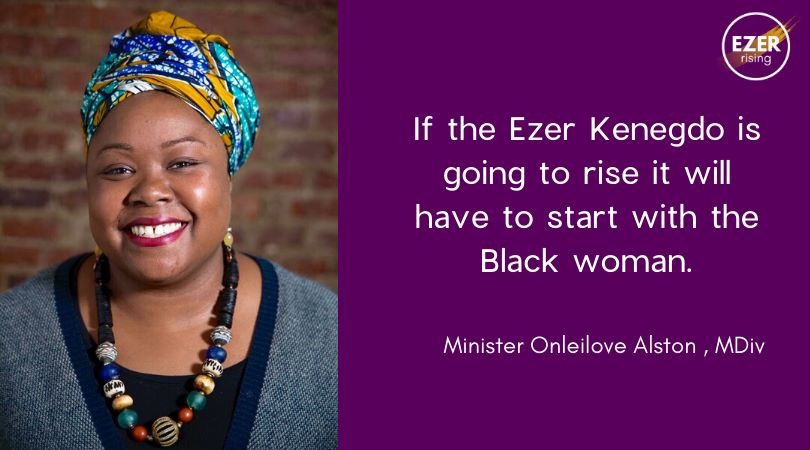 This reflection was originally shared on The Ezer Rising Facebook Page

In the spring of 2014 I was one of the speakers at a Campus Crusade for Christ NYC Women’s Conference but what was unusual about this conference is that its organizer studied at the Jewish Theological Seminary of New York. The organizer did an excellent job of having a diverse line-up of women speakers and the conference was well organized and empowering but she did such a great job of organizing the conference that she forgot to prepare her own message! So, she said “I will just wing it and speak on what the Holy Spirit leads me to.” As she spoke she went back to Genesis and the creation of woman and explained to us that the English phrase “helpmate” did not realty encompass the fullness of the Hebrew term that was used to describe woman and that term was “Ezer Kenegdo” which meant a spiritual power that rescues which is opposite but equal or corresponding to man. My mind was blown as I had already been studying the Hebrew roots of my ancestors in West Africa and had started to observe the Shabbat and Biblical feast but even though I studied some Hebrew I was not taught about the Ezer Kenegdo. As the conference organizer explained the true purpose of woman and who she was created to be I realized that theologians, church leaders and society as a whole had lied about the Biblical identity of the woman just as these powers lied about the Biblical identity of my people. I almost wanted to cry because for years as a woman who felt called to ministry and who was constantly placed in leadership positions I was made to feel that I was not living into Biblical femininity. Sadly, in Western society the Black woman was always made to feel that she was not the Biblical feminine ideal though Esther and Sarah looked more like us than how they are portrayed by White Christian media. I think The Most High God used that moment where the speaker had to wing it to teach myself and all women attending that conference our true identity. I also think the main reason I was to speak at that conference was to hear the message of the Ezer Kenegdo so I could share it with my sisters.

After the conference I began to study everything I could find about the Ezer Kenegdo from sermons, to academic lectures to books such as Skip Moen’s Guardian Angel. I began to learn that as the Black Biblical identity had been hidden and distorted the woman’s Biblical identity had been hidden and distorted. After about a year of study I and other women faith-basedorganizers from across the United States organized a gathering called A Women’s Theology of Liberation in Washington, DC for women clergy, lay-leaders and staff of the world’s largest faith based organizing network. In the network’s 40-year history there was never a training just for women and to open the training I did a faith reflection on The Ezer Kenegdo. As I shared I could see women of all races, ages, religious traditions and backgrounds become shocked and then encouraged to learn The Most High’s true purpose for their creation. After that training I was asked to do an Ezer Kenegdo lesson for a gathering of North Carolina’s top women politicians, labor union organizers and women ministers for a secular political organization. As I taught on the Ezer Kenegdo I let any atheist women in the room know whether you believe in the Bible or not the story of Adam and Eve impacts your everyday life as a woman living in the west. As I taught in this secular environment many women felt liberated to know that they were created not as an afterthought but with a critical purpose to help spiritually save as Ezer is only used to describe woman and The Most High when the Hebrew people are saved by The Creator. I was shocked that so many women resonated with this message and so I continued to study the Ezer Kenegdo. In 2015 while on a tour to visit African Hebrew Israelites living in Israel I was invited by an Igbo Hebrew Elder to come and teach Igbo Hebrew women Torah and I accepted. In the fall of 2016, Iboarded a plane for this unexpected journey. Igbos are a “Lost Tribe of Israel” from the Biblical tribe of Gad and though many are Christian due to colonialism and slavery many are returning to Torah and embracing their Hebrew aka Jewish heritage. As I traveled to every Igbo state except Ebonyi State I shared with various women’s groups about the Ezer Kenegdo and their calling as women. At Beit Ha Torah Synagogue as I was teaching one woman started to cry and said “our sister has come home”. This was extra special to me since on my mother’s side our oldest elder’s lineage goes back to Nigeria and we were owned by one of the top ten slave owning families in America. At birth my father also gave me the Igbo name Chika which my family calls me. One Igbo women’s group even surprised me by giving me the title of Iyom which means “Titled Mother” and I was humbled and shocked. This ministry trip changed my life and empowered me to continue to answer the call as a woman called to ministry.

As the years progress I have facilitated many workshops on the Ezer Kenegdo and even an online course. After many years of running from ordained ministry I accepted the call to be appointed as a Minister of Evangelism at my home congregation Beth-El The House of Yahweh a 66-year old Messianic Hebrew congregation in the South Bronx founded by a phenomenalwoman Mother Mickens who taught herself Torah. I have seen women learn of the Ezer Kenegdo and leave abusive relationships, take greater leadership in their workplaces, leave workplaces that do not honor their gifts, answer the call to ministry and teach other women this information. I am gratefulthat the conference organizer forgot to prepare a message and allowed the Ruach Ha’Kodesh aka The Holy Spirit (which in Hebrew is a feminine term) to speak through her. I am grateful to have been able to take the Ezer Kenegdo message to various women around the world but especially to Black women from all walks of life because Eve was a Black woman and the mother of humanity. How do we know Eve was Black will according to Biblical Hebrew and Greek scholar Dr. Catherine McGhee Livers in the Biblical History of Black Mankind:

“In the Hebrew Adam (or Ahdahm) is defined as Swarthy, dusky, reddish-brown soil, dark-skinned like a shadow. This word with the definite article can refer to the male Adam or an appointed class of people descended from Adam. Many Hebrew scholars agree that Adam in Hebrew means dark reddish-brown soil which denotes that Adam was a man of color as well as Eve who according to the Bible are seen as the progenitors of human-kind in general and the Children of Israel in particular.”

Science agrees with scripture that Adam and Eve would have been Black because in 1974 the 3.2-million-year-old remains of Lucy, or Dinknesh (meaning ‘you are amazing’ in Amharic) were discovered by paleoanthropologist Donald Johanson in Ethiopia, East Africa proving that this land was the cradle of civilization. These remains are the oldest found to date.

If the Ezer Kenegdo is going to rise it will have to start with the Black woman. I am humbly willing to do my part in dispelling the lies of religious tradition so that we can all know the beautiful and powerful purpose we were created for.

Minister Onleilove Chika Alston, M.Div., MSW is a faith-rooted community organizer, minister and writer living in Harlem, New York. She is the Founder of Prophetic Whirlwind: Uncovering the Black Biblical Destiny a teaching ministry and in April 2019 her first full-length book on African and African-American Jewish (Hebrew) tribes and groups was published under the same name. She is the faith-based coordinator for the Global African Business Association, The Lead Organizer for Urban Youth Alliance/BronxConnect and a Minister of Evangelism at Beth-El The House of YHWH. In 2018 she founded HerWisdom Consulting which provides women’s leadership training as well as equity and inclusion consulting for organizations and campaigns. She loves art, 80’s music, traveling especially to visit Hebrew tribes in Africa and her large family. She tweets @PropheticWhirl and her website is www.PropheticWhirlwind.com.