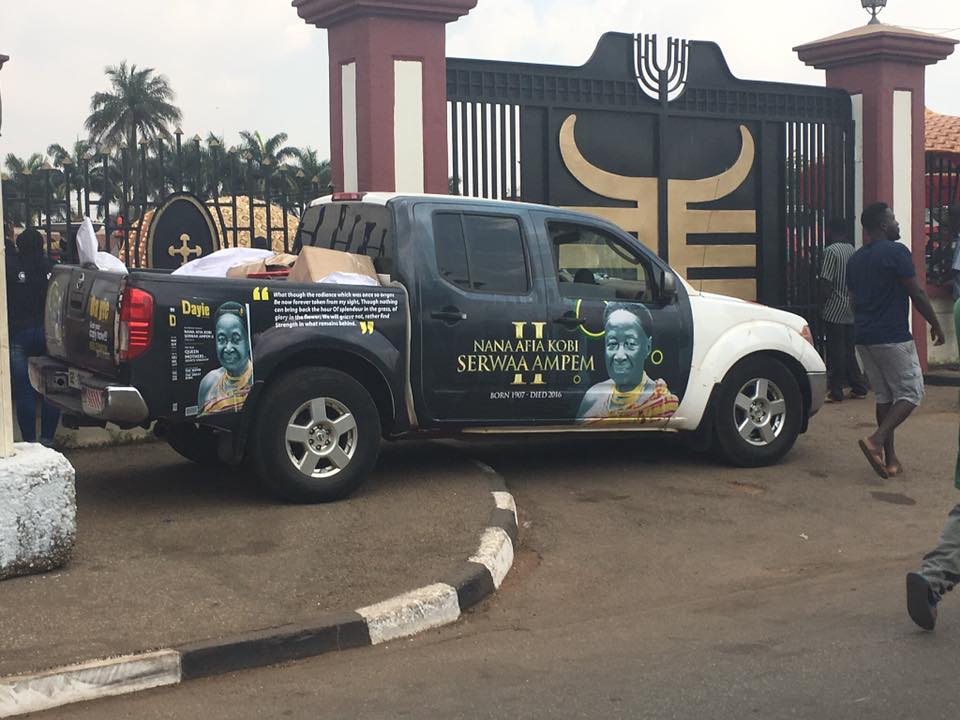 After spending about 2 weeks in Nigeria I boarded a flight to Accra, Ghana for the last leg of my ministry trip. The plan I had was to visit the Sefwi Jewish community in Sefwi-Wiawso. I visited the Sefwi community last year when I went to Ghana and I also had the pleasure of watching their story on the big screen when the documentary Doing Jewish: A Story from Ghana premiered in New York City at Lincoln Center. You can watch the documentary online on AMAZON, iTUNES and GOOGLE PLAY. I was invited by an elder woman in the Sefwi community and by another brother to return and teach the women Torah. When I arrived to Kumasi the town was crowded, traffic was crazy and hotels were booked up all due to the two-week celebration for the late Nana Afia Kobi Serwaa Ampem II, the 13th queen mother of the Asante Kingdom (Asantehemaa). Ironically the Queen Mother passed away last November when I was in Ghana and when I returned the celebration of her life was being held. Due to the traffic issues and the fact that I fell and sprang my elbow when in Anambra (and still went on to minister two more times) my plans of visiting the Sefwi women did not happen. Furthermore, because my visit date would have to be on a Thursday many of the women and girls were working and wouldn’t be able to make it. In light of this I plan to return to Ghana in 2018 to visit the community for a Shabbat and to teach the women. I was still able to give the donation to Sefwi Community Secretary Owusu Ansah Michael who was visiting family in Kumasi.

The rest of my time in Ghana was spent in Kumasi taking part in the festivities for the deceased Queen Mother. I was shocked by how much went into celebrating her life. Major corporations and heads of state came to mourn with the King and to celebrate her life. Chiefs and other Queen Mothers from all over Ghana came to pay their respects as did the President of Ghana, ministers and thousands of people great and small. I had never seen a Black woman get this much honor. While visiting an Ashanti elder though not a religious man he mentioned to me that the Ashanti are one of the Lost Tribes of Israel and last year when I visited the palace museum this was told to me by the tour guide and the King’s uncle who was at my hotel visiting from England to mourn with his cousin.

Many would say that a Hebrew tribe could never have Queen Mothers but actually when we examine our Bibles we read examples of the Queen Mother. The International Standard Bible Encyclopedia has to say on the matter: “(gebhirah, literally, “mistress,” then a female ruler, and sometimes simply the wife of a king (“queen,” 1 Ki 11:19); in Dan 5:10 the term malketha’ “queen,” really means the mother of the king): It stands to reason that among a people whose rulers are polygamists the mother of the new king or chief at once becomes a person of great consequence. The records of the Books of Kings prove it. The gebhirah, or queen mother, occupied a position of high social and political importance; she took rank almost with the king. When Bath-sheba, the mother of Solomon, desired “to speak unto him for Adonijah,” her son “rose up to meet her, and bowed himself unto her, and sat down on his throne, and caused a throne to be set for the king’s mother; and she sat on his right hand” (1 Ki 2:19). And again, in 2 Ki 24:15, it is expressly stated that Nebuchadnezzar carried away the king’s mother into captivity; Jeremiah calls her gebhirah (29:2). The king was Jehoiachin (Jeconiah, Jer 29:2), and his mother’s name was Nehushta (2 Ki 24:8). This was the royal pair whose impending doom the prophet was told to forecast (Jer 13:18). Here again the queen mother is mentioned with the king, thus emphasizing her exalted position.” To read more about Queen Mothers in scripture visit Encyclopedias – International Standard Bible Encyclopedia – Queen Mother.

The celebration was beautiful and I was able to meet some chiefs and Queen Mothers. I received a handmade pair of sandals that are made to be worn by people in the royal family and I was surprised by being dressed as a Queen Mother! Though things did not go as planned Yah was still able to use the time to teach me about honor and gave me a time of ultimate #BlackGirlJoy. Take a look at some of the pictures from my time in Kumasi below: